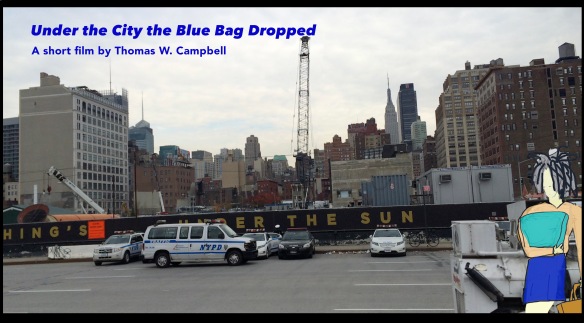 My short animation Under the City the Blue Bag Dropped was part of the 13th annual Cinema on the Bayou in late January, 2017. I did the first drawings for the video in December of 2008 and just kept coming back to it over the years. Finally, this spring, wanting a followup to my short Rooftop Serenade, that played in festivals last summer, I stayed on it every evening when I got home from work until it was where it needed to be. Everything is hand shot or hand drawn, put together in Photoshop, Premiere and After Effects. The original soundtrack, a song called Jaguar Muse that I composed in 2015, was edited and mixed in Pro Tools.

The festival ran from January 24 to February 1 and took place in Lafayette, Louisiana. The film has previously screened in the Coney Island Film Festival, the East Village Chain Film Festival and was awarded Honorable Mention at The Marblehead Festival of the Arts. The film has also been accepted into the Three Minute Film Festival in Santa Barabra, California and will screen on July, 6 2017.