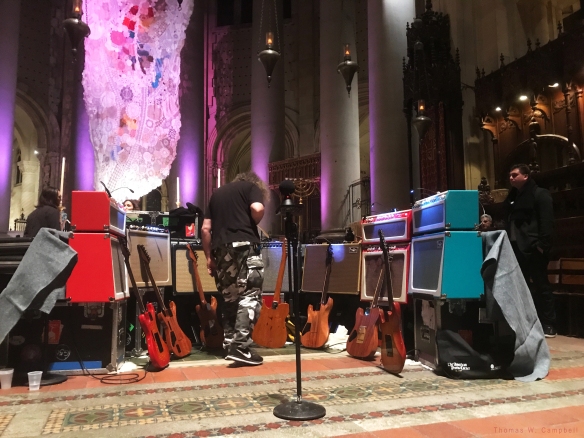 This is all true!

On Wednesday evening I arrived home from work and went for a walk in my Upper West Side neighborhood. Strolling along, listening to music, past the Cathedral, through Columbia University, taking in all of the sights and people on Broadway, I thought this is great place to be – write, work on my projects in the apartment, go for long walks, find the music and art and good meals that are all within walking distance (even long walking distance) from my humble little home.

When I got back to the apartment I plugged in an old radio tube amp and a more modern Fender, split a signal through a cheap tube distortion pedal, and started to see what sounds I could get from the beautiful 1966 Kapa (American) guitar I was so fortunate to come across recently. Got through this recording:

Then a text came in from a friend in the know: Lou Reed’s guitars and amps are droning in the Cathedral of St. John the Divine until 11:00 this evening!! What? Two Blocks away? Another chance to hear these instruments at work? The neighborhood surely does call…

I’ve heard and recorded music over the years at the Cathedral – it is a remarkable building run by great people who understand the value of art and humanity. I loaded up my portable recorder with the freshest batteries I could find and went next door.

There were four (or maybe five) sound stations in the Cathedral, with Lou’s gear in the pew area at the back, an open space, a keyboard, a guitar, and finally Laurie’s performance as one moved toward the front of the structure.

The recording below, of Lou Reed’s guitars and Amps in feedback mode, was recorded on the iPhone and is in mono.

Here is another mono recording, a front angle:

And here is a stereo audio only recording of Lou’s gear from the Pew, with mics facing the amps sitting to the right, about 15 feet away:

The sound design was inspiring and seemed to work like this – each section of performance  had access to a live feed of the of Lou’s guitar and amp feedback and Lou’s section also had a bit of live access to the other performers. It was subtle and allowed each of the performers to play with and react to what was coming from Lou’s gear.
Below is a stereo audio only recording of Laurie performing with an electric violin (of sort):

My recording technique is to go to a space or place, hold the recorder in front of me, and just stand there, occasionally glancing at the device to be sure nothing is distorting etc. Remarkably, people generally just ignore me. Finding a nice spot between Lou’s feedback and the rest of the Cathedral, I set the recorder down at one point and stepped back a few feet. Oddly, or not, people thought the recorder was somehow part of the event – a few people, including a woman and her entire family, came up to study it,

Below, I believe, is one of the recordings made from this spot.

One of the musicians played some subtle and tasty licks, while the cathedral filled with sound around him:

I spent some time in the space near where Laurie was playing, which also included the guitarist (on her side of the space) and a keyboard performer on the other side. Everyone was playing in minimal style, riding the wave of Lou’s feedback and drone. Below is a stereo spatial recording that concludes with movement through the space and an exit through the front door to Amsterdam Avenue.

And here is an older post about a day of celebrating Lou’s life at Lincoln Center a few years back: