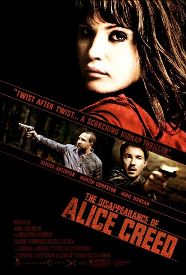 The Disappearance of Alice Creed
Directed by J. Blakeson
Review by Thomas W. Campbell
Link to original review at the National Board of Review

The Disappearance of Alice Creed (2010) is a low budget exercise in minimalism that hangs its quirkiness on a mysterious kidnapping.  It is the first feature film written and directed by J. Blakeson, and was shot on Isle of Man in Great Britain by Philipp Blaubach (The Escapist).

The story, which opens as a mystery then settles into a creepy and suspenseful thriller, is completely restricted to the lives of three people: Vic, the head kidnapper (Eddie Marsan), Danny, the second kidnapper (Martin Compston), and Alice, the victim (Gemma Arterton). Tension builds as secrets are revealed that ramp up the danger–turning an “ordinary” abduction into a continuously evolving series of confrontations.

The roots of the film are obviously in the theater–with only three characters and at least 80 percent of the action taking place in an apartment. The simplicity of the film’s style, though, becomes its greatest strength. There are no elaborate camera movements–it is shot in a matter-of-fact way that lets the acting take precedence. The film’s stylistic control mirrors the attempts by each of the characters to stay in command of their feelings even as their careful plans fall apart. Blakeson pulls it off in a way that makes the story work on an emotional level with only a few locations and no special effects. Like the films and theater of David Mamet, Blakeson uses an almost abstract way of portraying the competitiveness and frustration of the male species through elliptical and repetitive dialogue. We are made to wonder from the beginning what exactly is going on and who are these odd men who act with such precision, calculation and undefined rage bubbling so close to the surface.
Alice Creed opens with a carefully constructed sequence that is stylistically somewhere between Cinema Verité and a home improvement television series. Two men, one small and youthfully handsome (Danny), the other larger with a trim beard (Vic), steal an old white van and go on a carefully planned shopping expedition for items that seem suspiciously nefarious–gaffer’s tape, a saw, rope, hammer, sound damping material, plastic wrap etc. Like a seasoned team of construction geeks, they go about a systematic transformation of a rundown flat–turning it into a kidnapper’s lair. When they leave the apartment with a duffel bag of knives, handcuffs, and other tools it is clear that these guys are ready to implement a very specific plan. The plot propels forward when they throw a hooded woman into the back of the van and shackle her to the side. Not knowing what the men want of the woman who they take to the lair, strip, and tie spread-eagled to the bed, creates the kind of dread and fear that sits like an evil gremlin at the top of the skull–the power they hold over her is truly frightening.

When the kidnapper’s plan is revealed to be a ransom caper the relief is short lived. Deception becomes a recurring theme in the film, generating suspense as the characters dance with the danger of being found out. Strange behavior becomes the norm–Danny sits at a laptop anxiously looking at naked images of the woman in the next room–then later enters the dark room and runs his hands just over her body, fearful of touching her, until her sudden motion causes him to flee the room.

The small cast and simple film style will put off people who are looking for a more technologically influenced cinematic experience. But the threadbare nature of the performances and the evolving storytelling continuously manipulate our expectations in ways that keep the viewer tense and anxious. An empty bullet case, the result of a surprising revelation and conflict between two of the characters, lays on the floor, waiting for the moment when it will give them away to the third character. Nervous looks, well executed cross-cutting, and tense music build the scene to an almost unbearable conclusion. And the bullet case itself continues to inform the story, becoming a piece of evidence that just wont go away, despite unexpectedly humorous efforts to make it happen.

The three actors do a great job riding the emotional roller coasters that the roles demand. Arterton, as Alice, shows that she can handle a psychologically complex role without the digital effects of Prince of Persia. Marson and Compston create characters living on the edge of emotional crisis, holding tightly to their anger (and terror)–generating a compressed anxiety that is stoked by outbursts of rage and fear that are sudden, brutal and entirely realistic. Vic pounds on the bathroom door, demanding to know what Danny is doing. The soundtrack, overloaded with jarring music, harsh voices and the pummeling of fists elevates the cross-cutting into a truly unnerving moment. Later two of the characters have sex while the third may return at any moment to kill them. The suspense comes from the character’s reactions to each other, the fear and anxiety built into their dishonest relationships. It is a very internal sort of suspense–almost totally character bas–that the filmmaker creates so well.  And the result is a small film that disturbs in a big way.