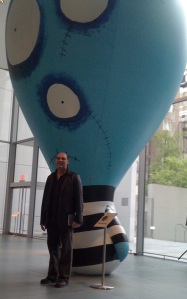 Thomas W. Campbell is a film addict who teaches, writes about the cinema, and produces stories in all digital formats (and is always searching for new ones). He is collaborative, loves new technologies and the people who use them, and believes that traditional and interactive storytelling are the yin and yang of the modern consciousness.

Thomas is an independent filmmaker and sound designer who studied screenwriting in the NYU Graduate Dramatic Writing Department and has an MFA in documentary production from City College. He has edited many documentaries about important artists, including Chuck Close, Romare Bearden, Faith Ringgold, Max Ernst, Red Grooms, Horace Pippin, Charles Burchfield and many others. His 2008 documentary Birth of the Sun, set in the 1980’s East Village art scene, played at numerous festivals in the United States and around the world. He recently completed shooting and editing the short film St. Vitus Dance, which premiered in Paris this spring and is making the festival circuit and the children’s music video Happy Pants, which will appear on Nickelodeon. He edited and designed the sound for the feature film Pulling and just completed co-editing the documentary Spirit Guides, about the return of craft bartending in New York City

Thomas has taught film production/post-production, film theory and history, and career strategy for film maker classes at Hofstra University, The School of Visual Arts, and Adelphi University since the fall of 2002. www.twcampbell.com