Saturday, July 30, 2016 was a day long celebration of the Music and Songs of Lou Reed. Everyone came out to play.
Here is a link to the original web page for lots of info:
http://www.lcoutofdoors.org/events/the-bells-a-daylong-celebration-of-lou-reed

The evening show took place in the rain so it was not conducive to bringing an DSLR camera to the show. But it lingers on in memory – David Johanson was particularly excellent.

One of the daytime highlights was a working display of 6 guitars and 6 amps, all from Lou’s collection, set to a four hour feedback loop in the lobby of Alice Tully hall. Ear protection was handed out. Below is a photo and a link to a 7 minute stereo excerpt I recorded:

Here are some photos I took – and a few notes:

@11:30 AM the “House band” played Rockers. Jon Spencer joined the band for “Venus in Furs”. Being a Lou Reed show someone had to unbutton their trousers. The belt came off and he gave his guitar a good thrashing, worthy of De Sade himself, while Sal Maida laid down the bass: 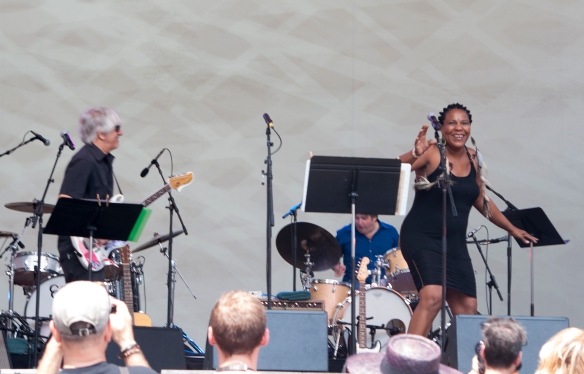 Lee Ranaldo, Sal Maida, Matt Sweeney and (I believe) Jesse Malin get down to business. 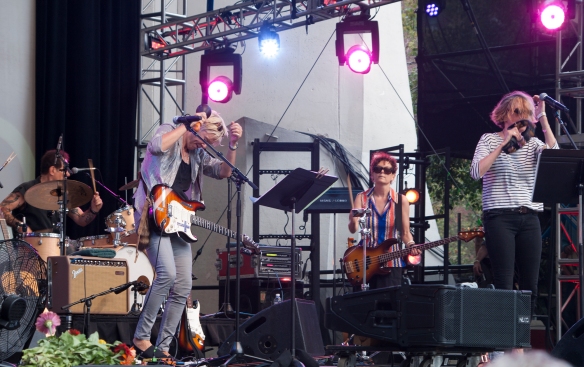 Bush Tetras know what to do.

Kembra Pfahles and the Disco Mystiques.

Julian Schnabel and Laurie Anderson during the afternoon readings. Sadly, Schnabel’s outdoor screening of his concert film Berlin was rained out later that evening.