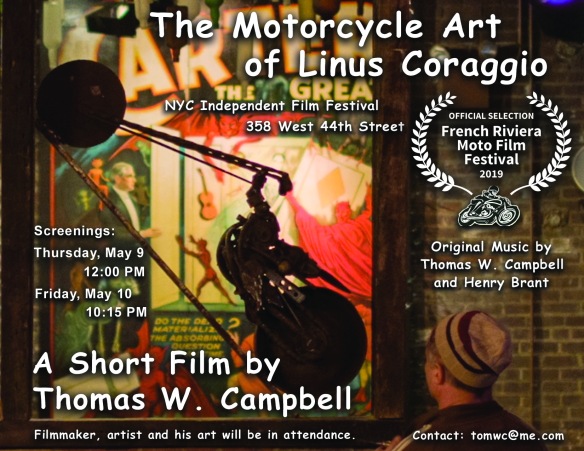 My film about Linus Coraggio and his Motorcycle Art will screen twice at the NYC Independent Film Festival on May 9 and May 10. This is the fourth film that I have worked with Linus on and the first one that is out there to be seen! Since the screening in Nice I’ve done a few updates – the black and white 16mm film at the beginning has been retransferred to Hi-Def, there is a nod to Indian Larry with an image of him and one of Linus’s choppers, I’ve added an image of my biker brother in the dedication and the soundtrack now includes a musical excerpt by Linus’s father, the experimental composer Henry Brant.

The links below that will get you to the festival for information and to buy tickets. We hope to see you there…

And here is a link to the French Riviera Moto Festival, where the film was an official selection.